Obama Does It Again! 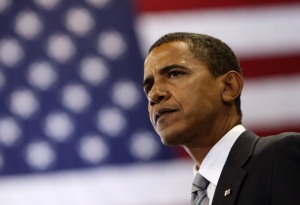 In his speech tonight Obama again blamed the house Republicans for not coming to an agreement with the Cap and Trade of the Debt. Increase and the Debt. Ceiling. He also had the nerve to quote President Ronald Reagan to further his agenda. Obama is going to the left of his own Democratic party trying to win over the independent vote, or any vote he can to win the next election, to hell with America and our financial outcome, it can all go to hell in a handbasket as far as he’s concerned as long as he gets re-elected.

The president said Americans should be offended by the partisan three ring circus in Washington. I think we are and have made that apparent. Is anyone listening? Obama also said the millionaires and billionaires aren’t paying their fair share of taxes.  Really? He wants a balanced approach, or so he says. That sounds to me like he’s pandering. He’s still blaming the deficit on Bush even 3 years later, stating that default is reckless. Ya think?

The national dept. is about to spur a National catastrophe.

The Cut, Cap and Balance Act was passed in the house last week, but the President vetoed it.  The President wanted a blank check 6 months ago and still wants it, says Boehner. Boehner said he made a sincere effort to work with the President, but he just wasn’t interested in taking “yes for an answer”.

This is a mess, and as usual it sounds just like “Business as usual” in Washington!

What the hell is going to happen? In the meantime as the jabronis in Washington mess around with the Debt. ceiling and our financial lives since this influences all the financial markets, we’re at their mercy. . . WTF?!?!?!

Come on guys, get it together, for the sake of THE PEOPLE! Remember, your constituents!? The reason you all have YOUR jobs? Please come to a sensible agreement so the markets don’t crash, so those of us who do have 401K plans will still have some money left. Please leave the America that we have known and loved with some semblance of worth. Leave your partisan infighting at the door and figure this out for AMERICA and her people!