Seriously……shopping should be a sport….maybe even an Olympic event. Think of the 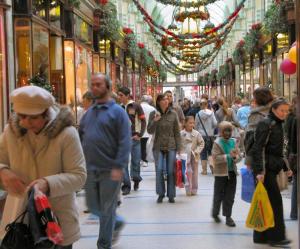 Today, my oldest son came home to share his scintillating company with me….well actually he came to drop his car off because his “SERVICE ENGINE” light was on and we’re “the wallet” so while his car was being serviced nearby, we decided to do some Christmas shopping together, and My Dear Lord, I am so tired from all the running and shenanigans that ensued, I just want to drop from fatigue…….but no………the day isn’t over yet, ’cause now, we have to go out to dinner along with Daddy and you know that’ll only open up more boxes of treats……….

So the one mall wasn’t good enough, we had to be masochistic and go for two, since our return didn’t work and when we met the salesclerk from hell who had no idea what he was doing though he made us believe he was helping us. We unfortunately thought he was up to the task and were soon proven wrong, he was either a fool or on the edge of senility as he took us to the wrong item to exchange and when that didn’t work out insisted on giving us a gift card as a return instead of cash. My son in his infinite wisdom went along as that was easier than argue, though I had to bite my tongue before I had a fit….I believe in cash refunds and I couldn’t figure out why he didn’t do it for us, ’tis the season fa la la la la la!

After that we decided to go to the other mall hoping to find the returned blazer in a different size, that’s why my fabulous son wasn’t worried about the gift card……call me crazy, but it was kind of the principal of the thing……..but I digress so onward and upward to the mall. Guess what…….on the way we kind of got a little lost…….no……….. misdirected as we were so busy gabbing we missed our exit on the highway not once but twice,  we eventually got there. And guess what? They did not have the blazer we wanted, but alas the shopping Gods were smiling down on us, we found a better one. Then we walked around the mall looking and window shopping.  We had a superb time, everything looked so enticing, all shiny and pretty, just what a princess like me really wants………but it is a lot of work walking around and hunting for what you wish to find. The trick is to try to think of something original for the person you are shopping for, find it in the right price point, decide which store might have it and actually find it all before your stamina or patience gives out. Shopping is tiring, both mentally and physically, don’t kid yourself. Today my patience and stamina wore out before my imagination could do the trick……but see, the great thing about shopping is there is always tomorrow…….

We bought big and heavy things that we had to lug around….thus helping cause muscles, a good thing, but that tires you out and perhaps there is a better way like having a dolly or something, though that is why I have my young strong son to help me! The Christmas season is so great but exhausting and though I saw so many things I thought I wanted and needed we kept it to a semi-minimum, I’m still contemplating some things. I did have some really good luck hunting for my husband and I must say, it is still early enough in the season that the sales help for the most part was on their game, being extremely helpful and pleasant, thus making the whole shopping extravanganza better for us.

But I can’t wait to lay down and chilax. Good luck with your shopping and don’t over do!

I am an outspoken woman with independent views of the world. I am spiritual but also realistic. I've successfully raised two men who I've sent off to college and am now following my love of the arts, including painting, drawing and writing. Thus, two blogs, two books I sporadically work on, voracious reading, among other loves keep me busy.
View all posts by Evie Garone →
This entry was posted in Christmas, Fashion, new, shopping, Uncategorized and tagged Christmas shopping, New, Shopping, tired. Bookmark the permalink.