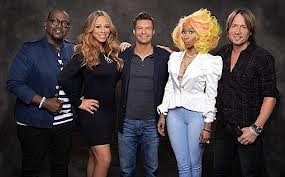 I usually have something to write about American Idol every season and this year I have been remiss by not writing anything yet.

Having seen that the judges were Nikki Minaj, Mirah Carrey and Keith Urban then hearing the negative buzz going on with them I thought I was going to skip the season. I thought I’d had enough. It has been 12 years of the show and sometimes perhaps the producers should know when it’s time to get off the money train.

But, as it turns out my DVR is still recording the show and as life will have it my husband has had to go to bed earlier than me and since we like to watch most of our other recorded shows together it seems Idol is one of the last remaining shows available to me to watch late at night while I’m not sleeping, obsessing about the Home Improvement project. So I’ve indulged. I thought I’d see what Nikki Minaj is really like. I know nothing about her and to be honest I only have a negative impression from her trash talking Mariah and looking like a little caricature with all her wigs, costumes and big mouth!

So onto the show. They started out, Mariah and Nikki cat fighting and in each others faces looking for all the world ridiculous and exactly like we all thought they would like two Divas giving the cameras and America the negativity two successful American women do NOT have to. Thankfully it has calmed down. Nikki was playing to the cameras naming every contestant who came in a silly nickname and Mariah was playing the older wiser States-woman earth mother. Keith Urban was trying to be peace-maker and Randy was Randy. Nikki stomped off the stage in a fit of pique after she stood up for a contestant who all the other judges were kind of picking on for an honest negatively placed country comment that they all took umbrage to. In this case I thought Nikki was right, the girl was just being honest, and they were all  pushing her towards Country……maybe that’s not where her heart was leading her to!

I have to say this year I think they are keeping the horrible tryouts to a minimum. They are not embarrassing American Idol contestants who can’t sing as much as usual. They are mostly showing heartwarming stories of people who CAN sing. I believe the ratings have dropped. I think America has had enough of the show. I think this might be the end of it. We’ll see what happens during Hollywood week. I haven’t been blown away by any talent yet. Nikki and Mariah have chilled out. I have to say Mariah seems like a nice person but makes some interesting comments almost from left field at times,  like Paula Abdul did. Nikki has calmed down and I find myself liking her. She is a very pretty girl. Keith Urban seems nice enough. Randy is Randy.

I am an outspoken woman with independent views of the world. I am spiritual but also realistic. I've successfully raised two men who I've sent off to college and am now following my love of the arts, including painting, drawing and writing. Thus, two blogs, two books I sporadically work on, voracious reading, among other loves keep me busy.
View all posts by Evie Garone →
This entry was posted in American Idol, Music, Shit I need To Know, singing, television, TV and tagged American Idol, cat fighting, Keith Urban, Mariah Carrey, Music, Nikki Minaj, Randy Jackson, Ryan Seacrest, Singing, Television, TV. Bookmark the permalink.