As I was reading my Facebook page, (which I just learned is as addictive as cocaine) I saw a post about Jay-Z referring to him as “hov”…well, I had to check that out.

I really can’t throw stones, as I go by the moniker “The Oracle Of Ahwatukee” this is just information in case you didn’t know.

Well, it seems that “the hov” was spotted at a Deadmau5 concert last night in Newark, NJ just chillin’ in the pit. He was busy minding his own business until he was noticed by too many of the great unwashed and had to be escorted away by security for his own good.

Now if you don’t know who or what Deadmou5 (pronounced deadmouse) is he’s Joel Thomas Zimmerman, a Canadian progressive-house music producer and performer from Toronto, now based in Los Angeles who was dating and engaged to Kat Von D until they had a difference of opinion on what was and wasn’t “cheating”. She thinks that even though they we were on again/off again and that’s when he had relations with someone else it was cheating……funny she didn’t mind when she was the other woman with Jesse James (the motorcycle builder) when he was married to Sandra Bullock (just sayin’).

When I heard the name Deadmou5, it rang a bell. I guess I’m getting older, ’cause I didn’t know who the hell he was. He was on Fashion Police where he accompanied Kat and wasn’t even given a chair to sit on. Now I see he is touring and very popular, I don’t think the Fashionistas realized who they had amongst them! 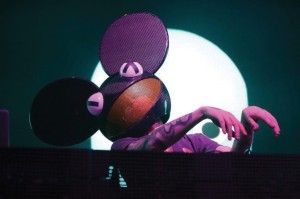 He started messing around with computers and techno music in High School mixing and making his own original music. He rolls his eyes when called a DJ, as he produces the software, the music and pretty much his own show. It’s original techno-dance music that has caught on big time and he seems to be in for the ride of his life as he tours the UK and America.

He recently left the label Ultra  Records after having differing opinions and is on his own both romantically and musically.

shout out to @ultrarecords on a real bang up job promoting my video by restricting it to territories. amazing promotional work as usual.
Aug 29 via web Favorite Retweet Reply

Whoops…….tell us how you really feel!

have a new track for you guys! ill post it as soon as i’m able. Just off to a desert to set of a high volume of explosives. seriously

FUCK YOU @ultrarecords IM OUT. 🙂 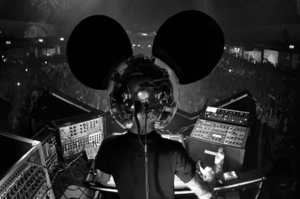 So now you’re all caught up………